I am selling my 14-karat gold Mignon Faget fleur de lis pendant. This pendant has traveled all over the world with me, including two book tours, and has been blessed by a Catholic priest and a Voodoo houngan. A symbol of New Orleans' resiliency and a piece that lived close to my heart for a long time. 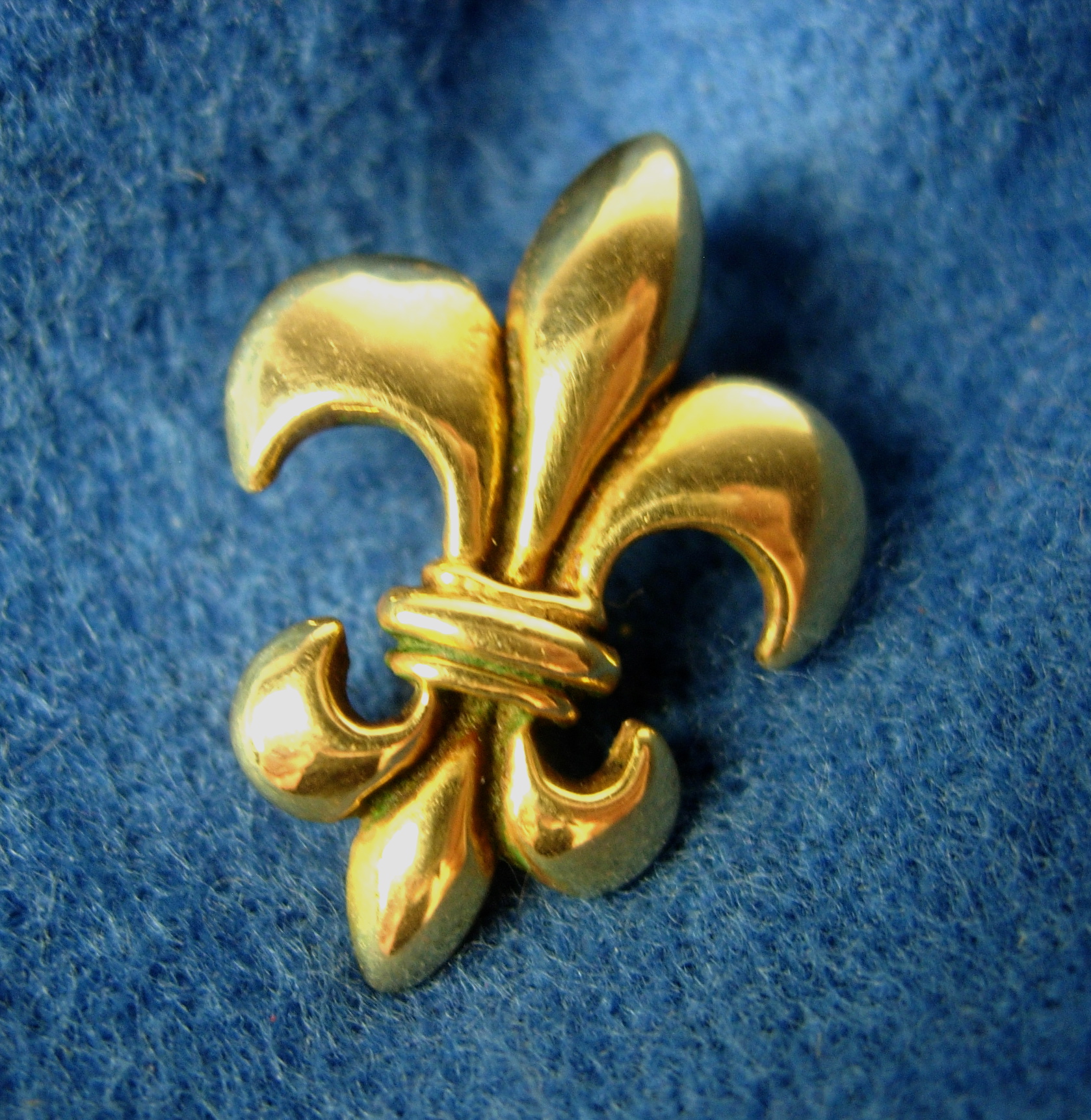 I'm due for a testosterone shot today, but I won't be having one because my latest doctor apparently cares more about covering his ass than he does about his patients' well-being. I thought we got along well at my first visit several months ago; he admitted he didn't know much about trans health care, but seemed willing to learn. He also sent me for some pricey blood work, but when you see a new doctor, that's to be expected. I got the blood work, got my T prescription, and was fine until it ran out last month, at which point I called his office to see if I needed to come in or could just get a refill. Here is my best attempt at paraphrasing his return call.

ME: Uh, this is MISTER Brite.

DR: Yes, well, I got the results of your blood work here and ... I don't know how to read it. You've seen those commercials about the dangers of testosterone? I mean, if you were a man, these results would be normal, but ... I just don't know about this stuff. I need you to have your previous doctor send me your blood levels.

Those italics are mine, and yes, he really said "if you were a man." At our visit, I was very clear about my gender identity. I realize that many doctors are biological essentialists, but in my opinion, that doesn't exempt them from acting like decent human beings. I'm not even going to get into his apparent inability to educate himself, or to maybe, you know, fucking ADMIT TO ME THAT HE WASN'T GOING TO before having me spend $250 on useless lab work.

I have an appointment with a new doctor, a GP who is reportedly educated on and sympathetic to trans issues, but not until next week. In the meantime, I have Internet-ordered testosterone that cost twice as much as my regular prescription coming from Slovakia, but it's not here yet.

A few months ago, I made this shadowbox titled "It Costs $10,000 To Be A Man." I was thinking of surgery, but by the time I die, I wouldn't be surprised if I've spent that much just on doctor appointments. 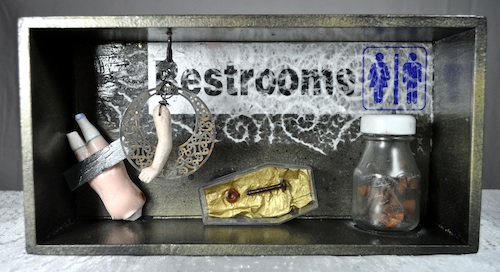 Here is a popular piece from my shop, a pendant made from green sea glass, a real shark's tooth, and a tiny shark charm. I currently have two of these available, and more (with a slightly different bead) coming soon. 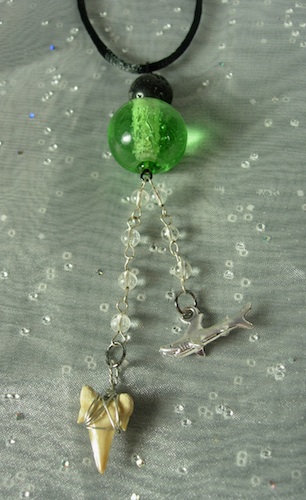 It's $24 and comes on a 30" black silk cord, or can go on your own chain. This seems like a good time to post a reminder that all my jewelry comes with a lifetime guarantee; if your piece breaks in the course of normal wear or use, please return it to me and I'll repair it at no cost to you.
Strange memories on this nervous night in Las Vegas. Five years later? Six? It seems like a lifetime, or at least a Main Era -- the kind of peak that never comes again. San Francisco in the middle sixties was a very special time and place to be a part of. Maybe it meant something. Maybe not, in the long run ... but no explanation, no mix of words or music or memories can touch that sense of knowing that you were there and alive in that corner of time and the world. - Hunter S. Thompson

This quote from Fear and Loathing in Las Vegas runs over and over through my head tonight, a near-perfect expression of being homesick for a place or a time or both. For me, it's always Amsterdam; I dream many times a week of being there, and try to imagine a scenario that would ever allow me to return, but it's hard to do that when even the purchase of a new pair of sandals from Wal-Mart wreaks enough budgetary havoc to give me pause. In some ways, my life was awful four or five years ago compared to now, because there was no love in it. In some other ways, though, I wish I'd appreciated how good I had it back then.

Strangely, my dream-Amsterdam contains several places that, though they do not exist in the actual city, remain consistent from dream to dream: an amusement park; an arcade full of tiny, authentic Asian restaurants; a wooden museum surrounded by lush tropical foliage. I also spend a lot of dream-time in the coffeeshops, though, and all of those are real.
I wrote this on Facebook the other day:

"One of the reasons I seldom use Livejournal anymore is that I have become fond of ephemerality. I'd never delete my LJ, as that would be dishonest and destructive, but sometimes I cringe to think all my angst and foolishness and tilting at windmills is still out there for anyone to read. There's a lot to hate about Facebook, but I do like the out-of-sight, out-of-mind quality of it."

A love of ephemerality is not necessarily good; taken to extremes, it causes me to live something of a fly-by-night life. Expired driver's licenses and such. It's also freeing, though, not to give a damn about one's own words. Yesterday, for the first time in maybe two years, I was in a Barnes & Noble. (Due to poverty and poor book-buying impulse control, I try not to go to bookstores anymore unless there is a particular book I want, and then I usually patronize one of the local independents. For everything else, I have rediscovered the wonders of the public library.) I always used to check bookstores to see if they had any of my books, and if they didn't, it would invariably annoy me. But I had been browsing in this Barnes & Noble for twenty minutes before it occurred to me that I could check. And then I realized that I didn't really give a damn if they had them or not, so I never did look. (I did buy The Babylon Rite by Tom Knox, who has the best tortures of any suspense writer I've ever read.)

[ETA: If you want to friend or follow me on Facebook, go here, or look up Billy Martin of New Orleans. All are welcome.]
I'm reluctantly selling this gorgeous vintage 3D Beatles pendant necklace. Opening bid is $50. 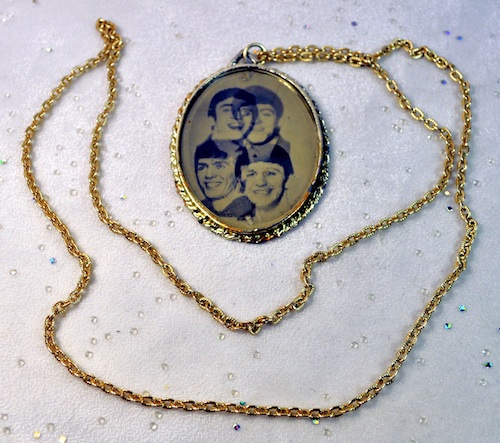 PZBART sale this week: 25% off signed books. Lots of titles available, and many rarities.

Crossposted at Dreamwidth. Comment here or there, as you will.
Since I'm fixing a piece right now, I thought I'd post a reminder that all my handmade jewelry comes with a lifetime guarantee. If your piece breaks in the course of normal wear or use, please return it to me and I'll repair it at no cost to you.

Crossposted at Dreamwidth. Comment here or there, as you will.
We've had a lot of scary and unexpected medical expenses recently, so I am having Night Owl/Early Bird Sale: 3 AM today (3-31-14) through the stroke of midnight, 50% off all Nola Jewels (my handmade jewelry) and paintings on canvas. The jewelry ships free worldwide with purchase of any other item in shop.

Crossposted at Dreamwidth. Comment here or there, as you will.
Hear ye, hear ye! Now announcing the OOPS MY TESTOSTERONE-LEVEL BLOOD TEST COST $226 BOOK SALE! I'm offering first-edition, out-of-print hardcovers of GUILTY BUT INSANE, THE VALUE OF X, and THE DEVIL YOU KNOW for $15 each with free U.S. shipping. As always, books are signed and can be personalized.

Crossposted at Dreamwidth. Comment here or there, as you will.
Collapse